Glastonbury Abbey was founded in 1954 by Benet Lake Abbey, Wisconsin. Both of these monasteries belong to the family of the Swiss-American Benedictine Congregation which is part of the world-wide Benedictine Confederation. Benedictine monasticism takes its roots in the life of Saint Benedict (480-547 A.D.), patriarch of western monasticism and has flourished in Europe, Asia, Africa, Australia and the Americas. The life of a monastery centers on prayer and contemplation but also practices hospitality to its many guests.

In its early years, Glastonbury conducted a Latin School for seminarians. In 1975 a retreat ministry was begun. The Lincoln School apartments in Hingham, a facility for the elderly and economically challenged, opened in November of 1980 and was managed by the Abbey until sold to the town of Hingham in 2010. The Abbey Center, opened in 2001, allowed the monks to offer more social, educational, and cultural events to the people of the South Shore of Boston. The renovation and enlargement of the abbey church in 2006 gave greater emphasis to worship and allowed the monks to welcome more worshippers. The beautiful grounds are an inviting space to those seeking serenity. People are always welcomed to join the monks at prayer five times a day.

Father Edward Campbell who grew up in Philadelphia joined Benet Lake Abbey and was assigned to Glastonbury in 1955. He was elected the first Abbot of Glastonbury in 1973 and served until he resigned in 1986. Father Nicholas Morcone of Milford, Massachusetts was elected the second Abbot of Glastonbury in September 1986. Abbot Nicholas resigned as Abbot on the twenty-second anniversary of his election, September 14, 2008. The community decided to request an Administrator from another monastery for a two year transition period. Meanwhile, the Prior, Father Timothy Joyce, became the temporary Administrator.

Father Mark Serna, former abbot of Portsmouth Abbey, Rhode Island, was installed as Prior-Administrator on Epiphany Sunday, January 4, 2009. The term of his office lasted until September 5, 2010 when the community installed Fr. Thomas O'Connor as Prior-Administrator. On June 29, 2013, the monastic chapter (fully professed monks) at Glastonbury Abbey elected Fr. Thomas as the abbey's third Abbot. A formal ritual known as "The Blessing of an Abbot" was presided over by Cardinal Sean O'Malley, OFM Cap., Archbishop of Boston, on August 11, 2013.

Glastonbury Abbey was named after a famous medieval monastery in southwest England, Somersetshire, near Bath and Wells. Famed for its legendary history of being the earliest site of Christianity in England, with a shrine to Mary, the monastery rose to greatness especially under Saint Dunstan who became Archbishop of Canterbury. Its last abbot, Blessed Richard Whiting, was put to death in the suppression of the monastery by King Henry VIII. Extensive remains are still to be found, including the walls of the abbey church which was second only to Saint Peter's in Rome in size. Our monastery in Hingham was named after it since all the surrounding areas of New England have direct English connections.


You can find out more about the remains of Glastonbury Abbey in England by looking up www.glastonburyabbey.com 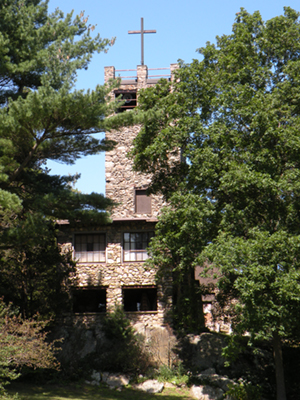